have you ever been involved in a claim dealing with poor poor performance, set stains or a shitty cleaning job?
Reactions: SamIam

Are we goin to Church?

No claim, yet. I do have a few customers that call me once/year to follow the rules for their warranty to stay active.
Reactions: Mikey P
S

In 20 years i'v had two that had them cleaned to protect the warranty. But I'll ask.

Mikey P said:
do me a fave, ask the next 50 customers if their carpet has a warranty......

have you ever been involved in a claim dealing with poor poor performance, set stains or a shitty cleaning job?
Click to expand...

I've only once been involved with a claim. Back when I was a certified stainmaster tech, they sent me out to attempt to remove some dye stains that had been previously cleaned by the homeowner. He had followed the instructions given him over the phone, we had no success, so they replaced all the carpet in his lower floor. Most of my customers are completely unaware of any warranties. The retailers don't talk about warranties or give out the literature.

We have cleaned several for customers.
Manufacturer request cleaning in an attempt to revive the poor wear quality.

Of course they end up replacing. Most of these cleaning are 12-18 month old carpet.

Other than a claim we have done a handful for warranty status.

small population area, been asked twice in 5 yrs by a retailer/installer to clean a recent install..

who then cancelled the clean and decided to replace, I never saw either one to truly know what the concern was

The only warranty I know of is at Best Buy.
Reactions: Lee Stockwell, hogjowl, Matt Wood and 1 other person
R

You are opening a can of worms where you can't put them back. Besides cleaning, I also own a retail flooring store, and in the sales process explain the warranty to the clients. There is always the caveat added that carpet warranties are not worth the paper they are written on. The manufacturers will hang the dealers out to dry every time unless the rug costs less than the inspection or if the the dealer sells alot of carpet for said manufacturer. Now, the above is not 100% of the time, but I personally would never want to discuss claim issues/warranty with the clients. The only thing this could lead to would be me looking like an A-hole or a pissed off client when something didn't go the way we expect. Hell, even when I file claims, I always set the expectations extremely low.
Reactions: Fat Mike and Cleanworks

A tiny percentage of homeowners clean for warranty purposes.

Retailers will admit that talking about warranty reminds people the carpet will need cleaning. It's a sale killer.

We still see a little claim work, but Jobs where the retailer or mill are involved are pretty rare anymore. We don't do inspections anymore and charge $500 per hour for expertise, which is usually what claims people want, while only paying for cleaning.

We cleaned carpet for a Home Depot customer that wanted to maintain the warranty. Carpet was delaminating everywhere. The homeowner said HD sent an installer out to fix delaminating seams and the installer told her she needed to get the carpet cleaned before making a larger claim. She's been fighting HD to get her carpet replaced for 8 months now, and has learned they stopped selling that carpet due to delamination problems. All along the way HD keeps returning to the stance that our cleaning is what caused the problem, even though it was pre-existing. They finally agreed to replace, but wanted her to choose from several options that were a lower price than the carpet she had. This has mostly been a hassle for her so far, but I wonder if the cleaning suggestion by the installer was to get someone else involved to share the replacement cost.


A mill asked us to get involved with a claim in a downtown building. A janitor had a leaky bag and left an oily line across the entire lower lobby. In-house couldn't get it out, They were actually pretty good, they'd used heated portables followed by encap. Nothing the slightest bit oily came out or could be hidden.

The building manager was openly hostile, since they were looking forward to getting hundreds of thousands of dollars back from the mill because the carpet didn't "perform." The only parking space we were allowed to use was 400 feet away, and supposedly the only water available was in the basement, two floors below the lower lobby. Ten minutes into the first attempt at cleaning the lights were turned off, and we found the control panel locked.

We came back the following weekend with portable lights, and found a sympathetic security guard who thought what the manager was doing was BS. He couldn't get us into the lighting panel, but he did unlock a water source on the main floor. Carpet looked like new when we were finished

I was able to get a lot of really good after-cleaning pictures before security threw me out. They must have thought they caught me right away, since the manager poured coffee all over the carpet and tried to say the spots were returning.

Who need this for the price of cleaning?
Reactions: Fat Mike, Lee Stockwell, Matt Wood and 1 other person

I sorta was involved in a potential claim, with perhaps, now, your best commercial customer in SF, Mikey.
Way back when i was IICRC certified master and also had Dye tech patch I was called out to inspect a new commercial carpet install. The color seemed off in one room. The client wanted to know if i could dye the carpet to match the others.
I determined that is was just nap reversal. I showed them the testing proceedure for such issue. I told them since the room is square just have the installer correct his mistake and flip the carpet 180 degrees. I told the client it would be stupid to try to correct with dye and just reinstall it correctly.
The customer was very happy.
Later they called me to bid on cleaning that RUG that has made you so much money.
BIG MISTAKE on my part- I sent an employee instead of myself.
The employee fearing he would have to drag that enormous rug down stairs and then somehow shove it into a van, simply said "sorry we can't do it"

.
Probably less then 5 customers in 31 years have even mentioned their warranty.
However, when the economy turns for the worst-- i fear there maybe more claims filed-- at which time the manufacturers' inspectors might try to throw the cleaners under the bus.
Reactions: Lee Stockwell, Matt Wood and Mikey P

Good for you, Mikey.
I doubt I would have charged them as much as you-- I've been too nice and cheap to get your prices.
Reactions: Mikey P

Mikey P said:
do me a fave, ask the next 50 customers if their carpet has a warranty......

have you ever been involved in a claim dealing with poor poor performance, set stains or a shitty cleaning job?
Click to expand...

Rarely I hear from a customer asking for receipts for a warranty claim. 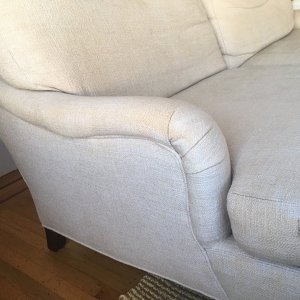