so Mikey told me the new owner of eldiablo tm
Is going to be at the Vegas class I'm supper excited I have 3 now .
One we have been robing parts from but I have a new 40 hp Kohler and a 410 blower that I want to put on it so we can duel wand and put it in a big box truck with 500 gal fresh and waste tank we do some large commercial pre virus .
I love my el Diablo's being i do mostly tile and stone there's no turning back i just wish they where a little more user friendly as far as like a safety cover for the heat control i knock it every time with my 4 to door to 2.5 vac y set up and I check it everything but I can't say the same for other guys I do train to check it everything but a cover would be sick . Any way any thought on the monster El d set up ?also I have a large emperor pump to put on it . I'm thinking about asking the owner if I send all I have to him if they would be willing to put it together as a prototype if they have not yet done this .
The simplistic design of there tm is awesome the chem injection simple the repairs are supper easy wel then most others I have had .
The performance is unmatched to any other mount i have used and i have worked on a lot of mounts not a s.s. yet .I hear there awesome as wel

Smarty, where are you??

Probably
Should be Mr.Shillsalot if it is
Reactions: Doug Cox and Lee Stockwell
M

hogjowl said:
Probably
Should be Mr.Shillsalot if it is
Click to expand...

He has experience with his machine just as you have with TCS and cleanco. That's not shilling.

Lee Stockwell said:
He has experience with his machine just as you have with TCS and cleanco. That's not shilling.
Click to expand...

YOU'RE NOT MY MOM!
Reactions: Willy P, Matt Wood, Steve Lawrence and 5 others

I'm supper excited too! And I want to see the wand duel too! Can you have a dual wand duel?

Willy P said:
I'm supper excited too! And I want to see the wand duel too! Can you have a dual wand duel?
Click to expand...

Only if Damon plays the banjo.
Reactions: rider0992

Can someone tell me why they’re calling the Kohler eldiablo a monster?

Matt Wood said:
Can someone tell me why they’re calling the Kohler eldiablo a monster?
Click to expand...

I've been sitting on this and a 40hp Kohler for a few years . Now its time .

Might be a fun project. How are you going to quiet it down?
M

Not sure I'm not mechanical by any means .when we rebuilt my amtex my old mechanic put a car muffler on it . Not a flow master but similar.
What are your thoughts ? The rebuilt scamtex is loud .

It will take the right size silencer for that blower. The problem is finding room to put it. Mufflers will not cut it.
Reactions: Matt Wood

Under the van
M

I am thinking Bout mounting stuff under the van .on my current box truck I have my dump line ran through the floor and mounted to the bottom so I don't get spillage in my truck supper nice to have will post pic in a sec .I am open to what it takes to do it right i will look into it for sure .
M

Really want on board air compressor mounted under or over just never enough room .
Reactions: DAT
You must log in or register to reply here.
Share:
Facebook WhatsApp Email Link 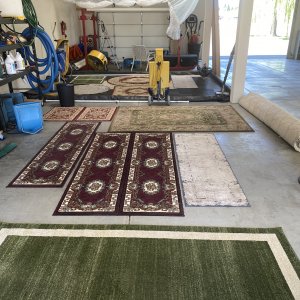