Has ATP testing been misrepresented in order to sell VLM equipment?

Fred Boyle said:
I think Mardie is a pretty good sport, I disagree with his argument but haven't found him being any more offensive than what has been tossed his way
Click to expand...

I agree. No need to suspend him at all.

So, he does not agree with the common belief here, will not be persuaded and stands up for his opinion. Good for him.
Personally I do not have much appreciation to the steam cleaning bashing on his web site. Not a big deal.

And he does not generate more insults here than are thrown his way.

One of the best comments I have read in a long time. OXYCRAP has become the fastest growing cleaning franchises by selling to NEWBIES not established cleaners. You don't need a test (that works great on hard surface but is a total JOKE on carpet) or even claims of divinely inspired design to embellish your product's results to sell newbies. Spartan chemical has been advocating ATP for a long time. Call and ask their scientists what they think about using it on carpet and they will bust up laughing, guaranteed.

The vast majority of my work is done with VLM for the simple reason that HWE is incredibly Unprofitable on large scale commercial properties that are often truck mount inaccessible. It's just a business decision, pure and simple. Even then I often will use portables when I must. Sometimes a steamin demon or other portable will give me access and better results. Anyone claiming VLM replaces HWE in 100% of situations should NOT be trusted. They either have an agenda and are being intentionally dishonest or they are a complete FOOL. Maybe both, I vote BOTH.


joelhall2012 said:
its funny....most guys who get in this business now and days they are so worried about the "system"......john is trying to sale his "system" as better because is removes more soil....or by touting guys who switched from hwe to vlm.....im pretty sure most of you got into this business to make money....and then act like your "system" is somehow more worthy....like you can sleep better at night because you "removed" more dirt.....it is my belief that95% of all customers call so you will make their carpets "look" better and "smell" better.....that's it...so simple.......and yet you all try and complicate it....I have no idea why....if youmake them look and smell better you have done what they wanted end of story...NOW if a guy like John would understand that if he sold a guaranteed marketing plan to get customers...and when you get those customers you can use this Trinity machine to make their carpets look and smell better...he would have something....but he does not get it....and is the absolute worst at marketing....him and his OP machines have been around for what?? 30 years....and still just pluggin along..nothing to be reckoned with....oxi fresh comes along 8 years ago and trumps anything John has ever dreamed of doing with a machine that removes NO dirt...just brushes in encap....and maybe leaving some saw dust in the carpet.......WHY??? marketing carpets that look clean and smell better......its simple brethren!
Click to expand...

John G said:
First off your whole premise is wrong, who said more sanitized, we said we removed a larger percentage of contaminants than did HWE.
I see you chose to attack the messenger and try to sway the message again, nothing new about that. Good try Mikey..
I have stated and all of our information on ATP testing has been quantitative, had you actually read the article you would have notice:
(Adenosine Triphosphate) as a means for comparing the effectiveness of different disinfectants is something that I cannot leave unaddressed.
We have never been concerned with comparing disinfectants, mainly because ATP primarily determines the amount of biologicals in the carpet fiber and makes no judgement on living or dead, it is a test of %'s of removal.
As she wrote in the article you included, the : The luminescence is expressed in "relative light units" (RLU), providing a quantitative measurement., it is important to reiterate that ATP measurements are non-specific meaning that they do not and cannot distinguish between microbial ATP and that from other sources such as food residues and mammalian cells. Further, ATP tests are unable to distinguish between viable and non-viable organisms as both living and recently killed organisms "spill" ATP onto surfaces.
So NASA in its protocols does not use this test to ascertain living or dead Biologicals, only amount of, hence the test is a perfect scientific test for % of removal, is what we have tested and proclaimed. Notice this is set up by BEM and NASA we use the machine the protocols were set for.

View attachment 4309View attachment 4310This is but a small sampling of our data, however it does show the consistency in the finding.
All your post did was show you lack of understanding of the tests, and in your eagerness to disprove what you don't like to hear, you just basically proved our whole point.

Paul Craig interview was just further evidence of how we tested and what convinced a Vortex guy to go to a Trinity, Watch HERE

That was a lot of blablabla!

Can anyone else say bs alert?

WARE ARE THE WHEELER BROS NOW?

WE NEED THEIR EXPERTISE!
Reactions: Zion Carpet Cleaning, Kenny Hayes, Cleanworks and 3 others

Jimmy L said:
"Jimmy" is not some stoopit carpet cleaner, he tawks to Stephen Hawkings on skype every week.

Only thing it was good for was to hang hoses on in my garage.
Click to expand...

Mikey P said:
Those same scientists say that we evolved from Jimmy.


Who are you going to belive John?

you..YOU are going to hell Guerkink.
Click to expand...

I guess we're all going to sell our truck mounts and buy oreck orbiters now that we've seen the light.
Reactions: Desk Jockey

SIMPLE MINDS AND DOES NOT COMPLIKATE IT!
Last edited: Jan 5, 2021

Cleanworks said:
I guess we're all going to sell our truck mounts and buy oreck orbiters now that we've seen the light.
Click to expand...

I did one this morning for a PM.

some guys do these daily. I ran a nuclear prespray, added 4 scoops of oxy boost, ran the TM @ 700 psi, and scrubbed with the CRB for an hr....

You know things are slow when threads from nearly 7 years ago are suddenly active again. That being said....

Whatever your past interaction, relationship or experience with John and Trinity may be, this is a serious time. If you pray, pray for John Geuirkink as he battles this awful disease. He is in a bad way and needs intervention from our Creator to beat this. May God's graced fall on us all should we encounter similar challenges.
Reactions: Lee Stockwell, Jimmy L, Desk Jockey and 2 others

Sorry to hear that!

I spent two days with him a year ago in San Diego.

He helped clean the RMH there with us. His stamina wasn't the greatest but he did ok.

randy said:
You know things are slow when threads from nearly 7 years ago are suddenly active again. That being said....
Click to expand...

How the hell does a rinse that is also a encap shampoo and a HWE booster, contain "citrus" and "oxy" and a film former yet leaves no residue? these all in one miracles in a jug products have me shaking my fat head.. 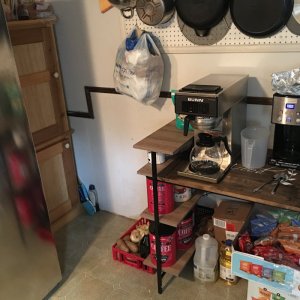