Why are so many people leaving the OP method?

I read all the time about about new guys hearing about OP and buying machines.

But I also see many long time OP guys jumping ship and moving on to other things. Many trading their machines off for other equipment or different brands of OP machines.

Why are so many people leaving?
G

I haven't seen where so all these people are leaving OP.
G

Lee, if they're buying other brands of Opee machines, they're not "leaving" the Op method behind

as far as new guys buying and then moving on..
I'd suggest that has more to do with hype, "best case scenario" production numbers, an cost of use.

then when reality arrives with their new machine an use, they become disenchanted with the method.

They realize VLM is a niche market with many hurdles and challenges to over come that doesn't happen w/TM.
Not the least of which is custy "perception"

Then add the PTIA factor of trying to clean soiled carpets, washing filthy pads and replacement cost, and OP only can loose it's luster pretty quick

personally, i don't see many of those issues of equipment "gathering dust" in a garage or shop are peculiar to OP, though.

How many were duped into believing encRap scrub'n run was the greatest thing since slided bread?

How many RDMs, Rotovacs and other "great gear de jour" gather dust in many shops/garages?

Quite to the contrary Lee, many more getting into it, many 2 and 3 decades users out there, many hwe converting to OP, so I don't know where you get those "facts?"/

You still in kindergarten Bob?

OP cleaners make up such a small % of the industry, and most of them post, so any change in that segment seems more important than it really is relative to the industry as a whole.
G

If I were a full time cleaner I would have Vortex, Cimex, CRB, Roto Vac, 3 OPs and everything that I know will clean. Then I would master the ART of cleaning. OP is a good way to start. But you can not stop learning. With a few of these things in place I would learn to make money cleaning.

Just because you were quiet doesn't mean you were good or nice.

Now go back to your corner.
S

Who is the world's largest carpet cleaning company ??

What system do they use ??

Does anyone have a "one machine does all" system at present ??

OP cleaners make up such a small % of the industry, and most of them post, so any change in that segment seems more important than it really is relative to the industry as a whole.
Click to expand...

You don't know much about OP do you Marty, that statement is downright ignorant.

Funny thing is "most" the OPE'rs I know do NOT post. And I may be mistaken, but I think I know a few more of them the Mr. Alabama!
R

And I may be mistaken, but I think I know a few more of them the Mr. Alabama!
Click to expand...

John it wouldn't surprise me if you knew all of them. It can't be that long of a list.
T

"You don't know much about OP do you Marty, that statement is downright" ignorant.

And John is the expert of ignorant statements
G

Especially after putting up with you so long on the blue board, huh Bob?


I'm not a brown noser, Bob. I was simply stating that I don't see where all these people are leaving OP cleaning.

Do you still have your own board? What's the addy?
L

I suppose Larry is correct that it's kinda like "gear de jour". I guess it's not that they are leaving it behind, it's more like "everyone has one in their closet".

An OP machine or a rotary is a handy piece of equipment to have around.

I hear about guys that went from hwe to low moisture cleaning. I know one guy that did this simply because he couldn't afford his equipment anymore and was on the verge of going out of business. OP was a cheap way of staying in business until he could turn things around and professional equipment again.

I think OP gives you options. Last year I offered HWE as a premium service and OP as my budget option. There were people that liked the OP and there were others that wanted real cleaning the next time.

I would never want to be without my OP machine. Last night I did a job with mine, and was thinking that I might like to get one of the latest models with the wheels.

isn't it funny how OP/bonnet guys are generally such weirdos??

John G, you saying truckmount guys are leaving in mass to operate your type of cleaning method is horse shit.

I think even most people with truckmounts own a op and dont want to part with them. I have a truckmount, 3 op's, a cimex, buying another one and want to buy another op. I dont want to tip bloom a nylon plush or freize but I just cleaned an upstairs condo not accessible with my truckmount without 500 foot hose runs. In, out. It was quick, easy and VERY profitable. We just all like new toys. Gotta RX-20, RV360 and Rotovac powerwand "just in case" I still am amazed at what my 20" Brute does. All tools have a place, when our toolbox overflows, we sell some and buy something else!!
D

I'd like to buy a good used OP machine if somebody has one just collecting dust somewhere.
D

Well, I sure like our Cimex. Used it as the finishing touch after vac, prespray, vortex with wand and RDM. The church foyer sure was clean and sparkly after we finished. Cimex and some encap gave it a nice finish.

It's nice to have so many tools.

You know, sooner or later if you don't have an OP machine, someone is gonna call you a hack.
D

If I had an OP machine, I would use it when beneficial. I would just have to send the dirty towels to John so he could launder them for me.
G

Doug Cox said:
You know, sooner or later if you don't have an OP machine, someone is gonna call you a hack.
Click to expand...

Actually Odin the worst fiber bloom I have EVER seen was that carpet you and Tony cleaned in Knoxville, never seen such a hack job in my life, and YOU worry about fiber bloom? LOL Klodesak wannabe!

I would love to clean head to head with many of the guys who think OP is crap, I would LOVE it and let THEIR customers decide. 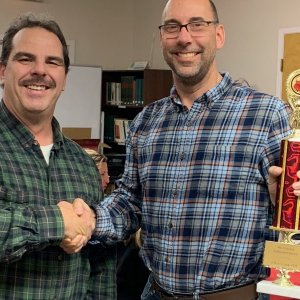